Art as Self-Alteration, Rather than Self Expression (John Cage)

Seeing the many articles about John Cage threaded through Improvised Life, a reader recently sent us Where the Heart Beats: John Cage, Zen Buddhism, and the Inner Life of Artist. It’s an astonishingly rich book that tracks Cage’s internal/personal/spiritual journey to create art —both music and visual — that would have a profound effect on generations of artists. Like all great biographies, it illuminates Life as well as a life. 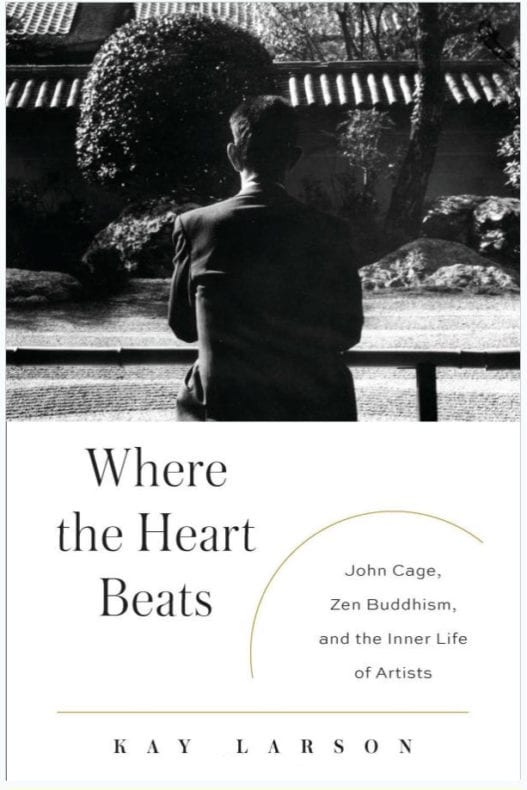 Wishing to lose the ego, control and choices normally associated with making art and music, Cage developed a method of asking questions only, and then using the I Ching, an ancient Chinese book of divination and wisdom based on random throws of coins, for the answers*.

Then the answers, instead of coming from my likes and dislikes, come from chance operations, and that has the effect of opening me to possibilities that I hadn’t considered. Chance-determined answers will open my mind to the world around.

…the implication if you use chance operations, is that every answer is good. 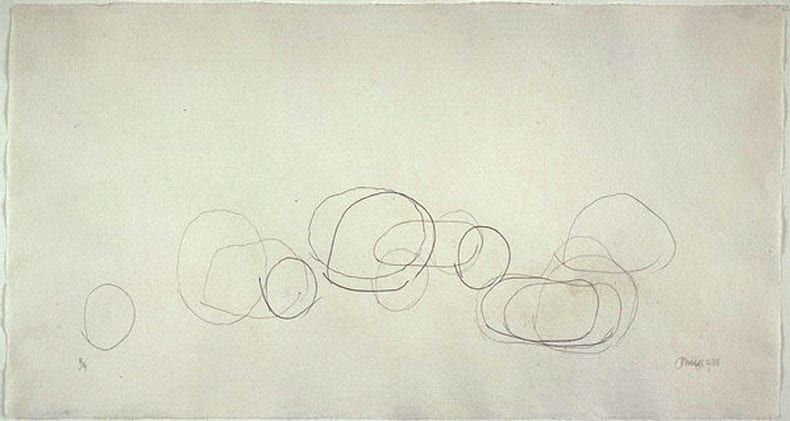 It is a remarkably daring idea that turns traditional approaches to making on its head. We wondered IF Cage TRULY stuck to whatever the answers given him were; we found the answer in Larsen’s book:

People frequently ask me if I’m faithful to the answers, or if I change them because I want to. I don’t change them because I want to. When I find myself at that point, in the position of someone who would change something — at that point I don’t change it, I change myself. It’s for that reason that I have said that instead of self-expression, I’m involved in self-alteration.

…instead of self-expression, I’m involved in self-alteration.

We’ve been mulling that idea for weeks now: relinquish control in the face of chance events, and rather, change ourselves in response to them… 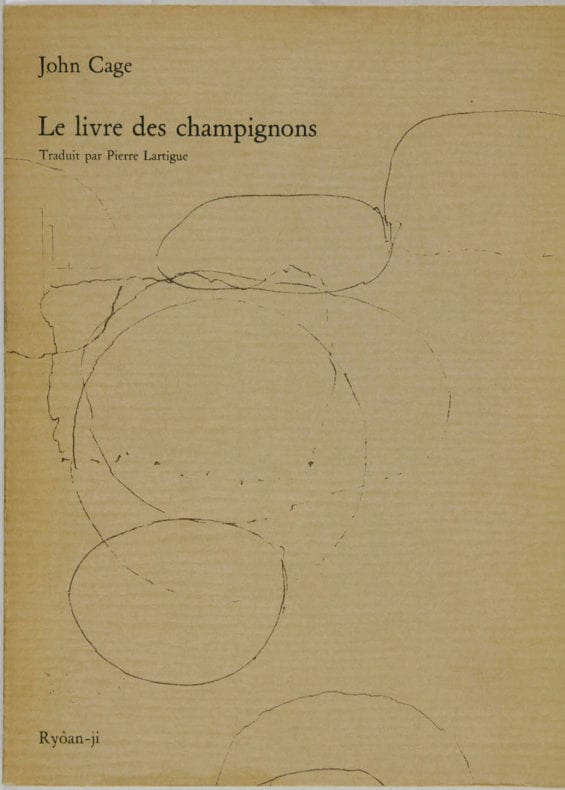 Cage made several series of etchings, paintings and drawings by using stones he collected, in league with chance, an ongoing theme in this visual work. Writes Larsen:

One day Cage needed a cover design for one of his books, ‘Le livre des champignons’. He picked up fifteen stones that had been lying around in his house. (There are fifteen stones in the famous Zen garden at Ryoanji in Kyoto.) He put them down on paper and drew around them at points determined by the I Ching, satisfying his French editor and himself.

Why stones? He had been treasuring them for years? He kept them displayed all through his apartment and cherished them as though they were artworks. He would sometimes send a truck to get a big stone he really wanted.

Using what you have around you in this moment is a good Zen instruction, of course. But perhaps he was thinking of Huang Po and the buddha-nature of stones and cigarette butts. By studying the uniqueness and forcefulness —the individual being —of stone after stone, he could honor their right to be themselves, as well as the important of that principle in his own life.

Invited to make prints at Crown Point Press in Oakland, Cage took the stones with him. He soon discovered he could lay them on a lithographic sheet and draw around them. When run through the lithographic press, the images would be printed in watercolor-like tints and hues. The stone portraits are now signature imagery of Cage’s visual art… 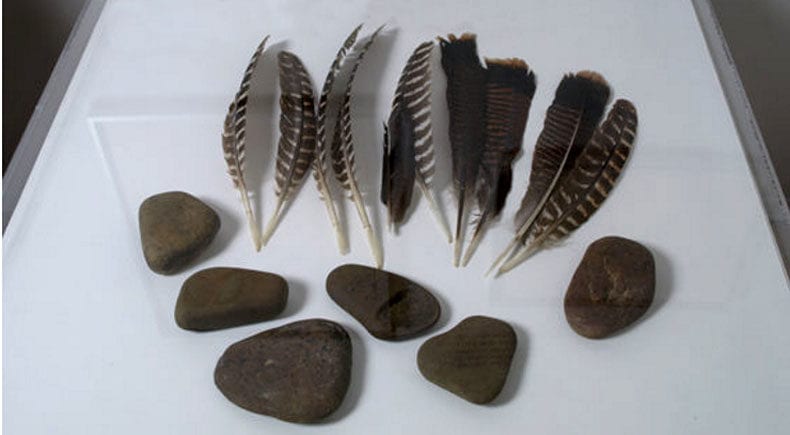 Cage devised various systems of asking questions of the I Ching and have it randomly generate, via computer, answers as to which tool he should use, how many marks to make, where a stone should be placed and so on. This video shows him using the process to make a series of prints using feathers as the brush, inspired by a bird’s wing brush an artist friend had given him:

I like the feather because of the, well, it gave me a kind of confidence, because a feather isn’t a normal brush. 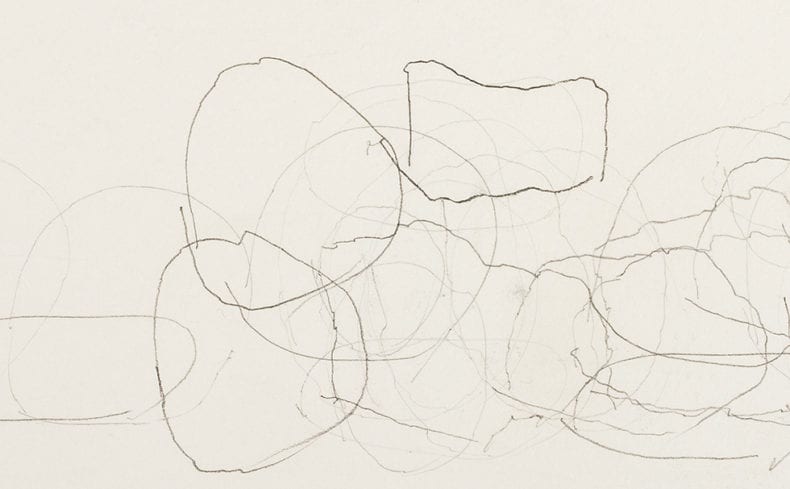 *To those who study and use the I Ching, use of the word “chance” is a problematic one. Although it would seem like throwing coins to generate answers to a question no doubt sounds like chance, its answers evince uncanny accuracy and specificity…

For those wishing to explore the I Ching, I recommend several editions, to be used in tandem.

The I Ching or Book of Changes, Wilhelm/Baynes

Guide to the I Ching by Carole Anthony 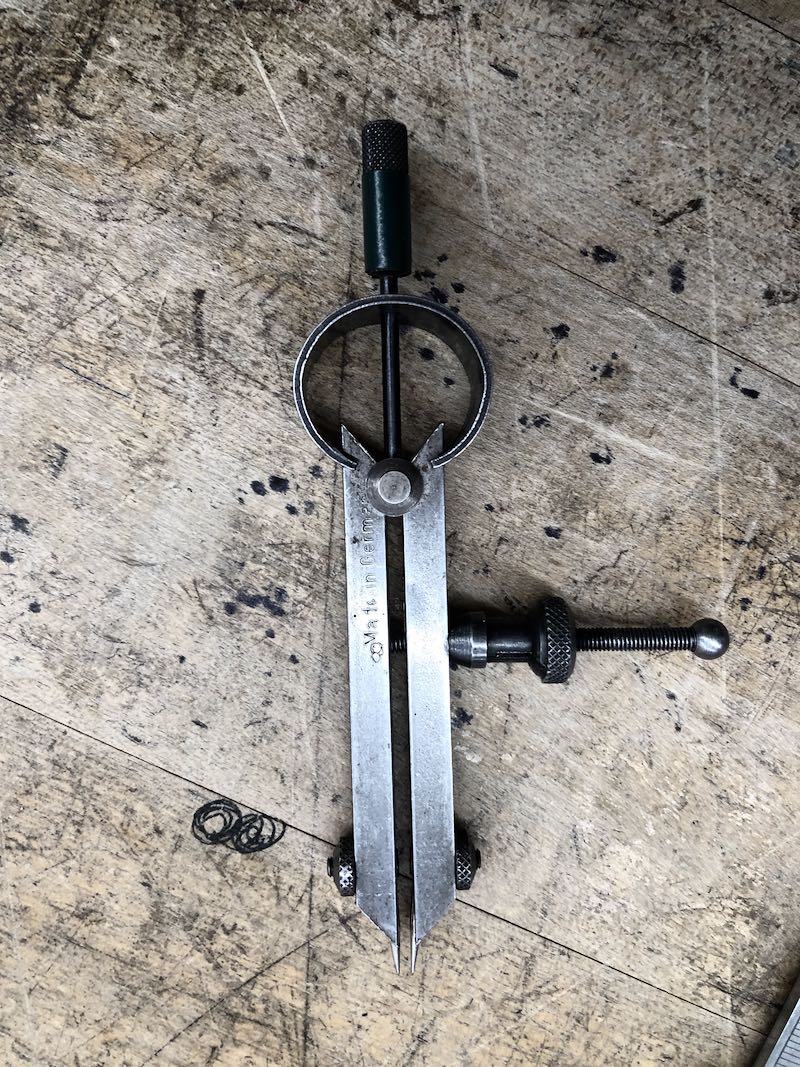 Listening to the Spirit of the Tools We Use (Tim McCreight) 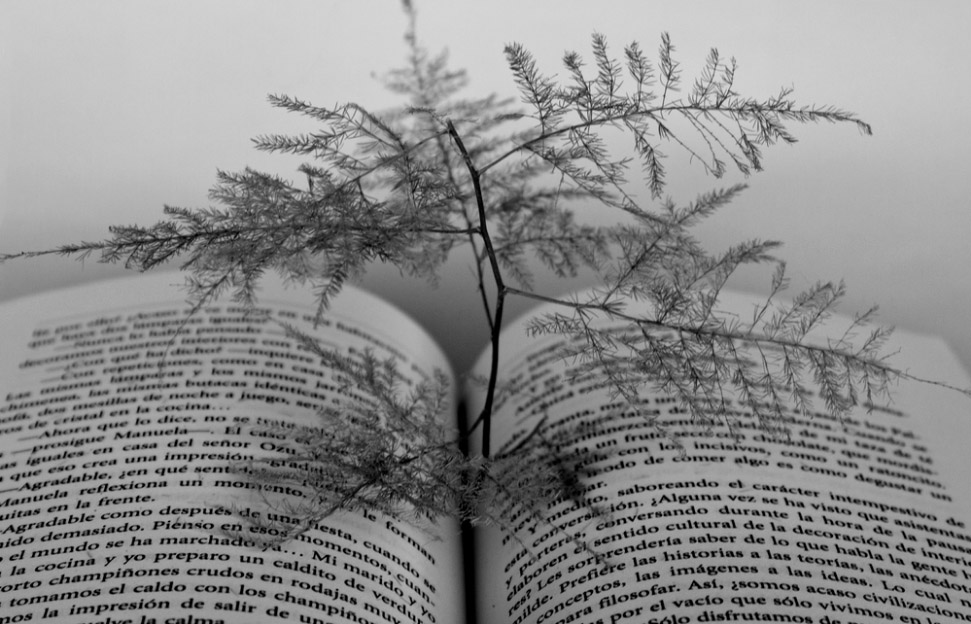 The Inferno in Our Pages 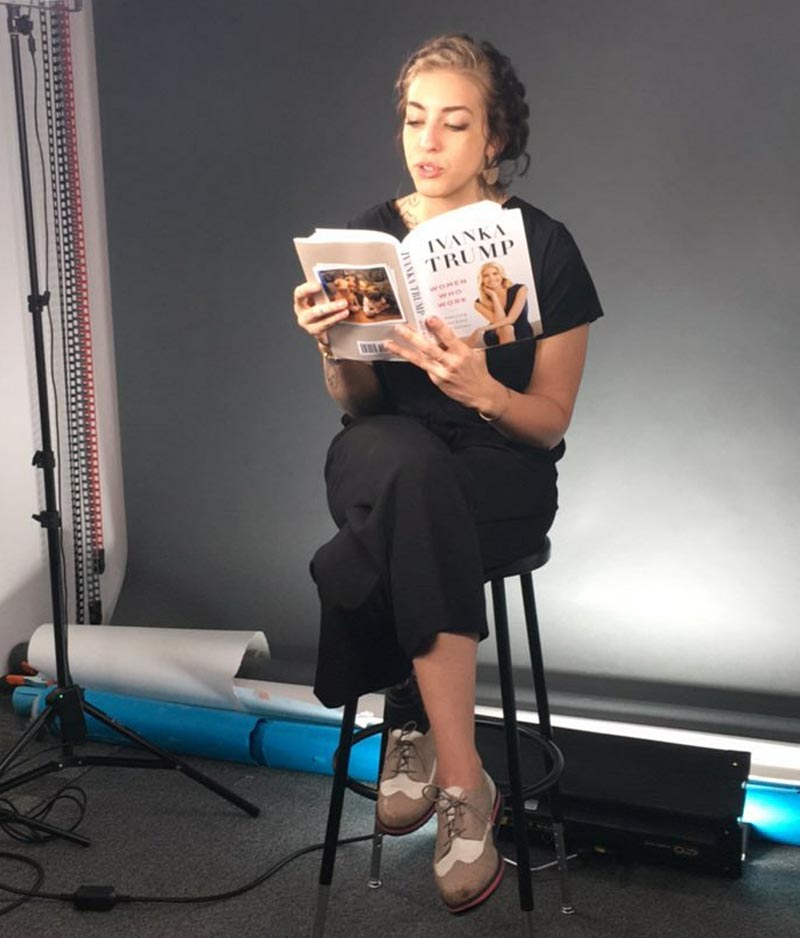 scroll to top
Send this to a friend
I invite you to read Art as Self-Alteration, Rather than Self Expression (John Cage) on Improvised Life! Take a look at it here: https://improvisedlife.com/2017/03/22/art-self-alteration-rather-self-expression-john-cage/