improvisation in the natural world 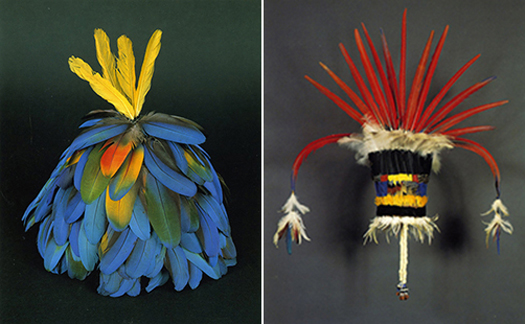 I’ve been thinking a lot about birds lately, about the mystery of their migrations; their unerring return each spring.

Our Cooper’s hawk is back from the dry barrancas of Zapotecas, its familiar kek-kek-kek vying with argumentative crows and cooing mourning doves at dawn. Improvisatory arboreal architects are at work big time.

Humingbird hangs its timid sac of cat fur and melaleuca leaves on a spike of palm.

There’s sex and magic in the air, a synesthesia of feathers and song. Guatemalan poet Humberto Ak’abal, lauded as a “Mayan Basho”, describes it in Poems I Brought Down from the Mountain

(translated from K’iche and Spanish by Miguel Herrera and Robert Bly.)

Owls desire them,
the little feathers on their heads
stand up.

To the south, plucked in the rainforest, ritual feathers made magic in Brazil (above).

Under the volcanoes on the shore of Guatemala’s Lake Atitlan, José Catú embroiders imaginary, rainbow birds on a length of striped cotton he has woven on a backstrap loom.

Such embroidery is usually women’s work in Santiago Atitlan, stitched on red and white striped cotton. But Jose enjoys riffing on the old style, sitting in the sun,letting his fingers follow wherever his mind’s eye leads him across the purple cloth. Perhaps a tourist will come along and buy it. Perhaps he will sew it into a pair of  traditional pants for himself. Right now, his attention is focused on the birds.

—Susan Dworski
Note: for those that want to follow the bird trail more, check out this piece from the Times: What Do the Birders Know?.
Related posts: maria popova + hermann hesse on what trees teach us

what happens if you start your day with a poem?